Plug-and-Produce According to Industry 4.0

Students: The technology of the future implemented with SIGMATEK 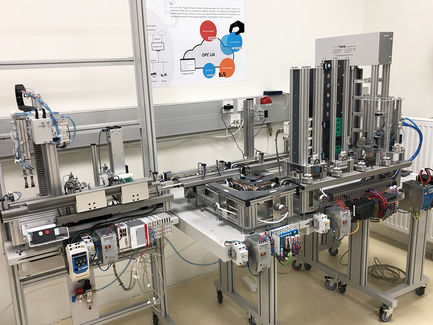 During the course of a project, the students of the FH Salzburg Daniela Deutinger, Christian Höflmeier and Regina Schönherr dealt with the topic Smart Factory. With support from the automation manufacturer SIGMATEK, the project members could implement a Plug-and-Produce capable production system in the SmartFactory lab.

Three students from the course of study Information Technology and System Management (ITS) at the FH Salzburg have made it their job to construct a modular production system. Based on the Industry 4.0 standard, a laboratory was created over the course of last year to demonstrate future technology within the DTZ (Digital Transfer Centre) framework. The three teammates decided on a method in which each module of the production system operates with a decentralized controlled CPU from different manufacturers. The goal was to allow the modules to be combined and removed as desired – without affecting the entire system. In addition, a concept for a primary control system was developed. For communication between the different controls, OPC UA was used. The modular production system consists of four modules: Receiving, rotary plate, high-bay storage and shipping. An additional edge controller generates a digital twin from the OPC UA data of the subsystem CPUs and other intelligent added-value services.

The rotary table and high-bay storage were implemented with control technology from SIGMATEK. The extremely compact DIN rail modules of the S-DIAS system were used for CPU units, power supply, digital inputs, relay outputs and potential supply. “Thanks for the support. Working with the modern SIGMATEK components was fun. They provided clarity and simplicity during the configuration”, points out Prof. Dr. Simon Hoher, project supervisor. For SIGMATEK, cooperating was also a pleasure. “Around half of our employees are technicians. The support and advancement of young technicians is therefore especially important to us", explains Marianne Kusejko, Managing Director Finance and Human Resources at SIGMATEK.