with Automation Technology from SIGMATEK 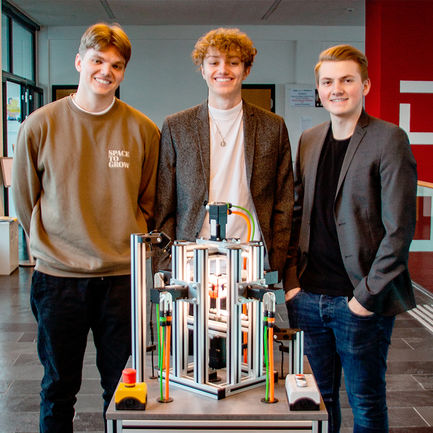 Over the years, the “Rubik’s Cube” has been a source of distress for many people: Thanks to the Rubik’s Cube Solver, created by three students of the HTL Saalfelden, the complex cube solves itself – fully automatic in the shortest time. The young engineers were supported with the project by the automation expert SIGMATEK.

As part of their diploma thesis at the HTBLA Saalfelden, David Haidenhofer, Markus Kreutzer and Paul Kreuzer designed a machine to solve a scrambled Rubik’s Cube. In just 385 ms, the well-known puzzle is magically solved using the most modern technology. Here you can watch a video.

The students from the electrical engineering department used their collective knowledge in information-, drives- and automation technology for their final project. Using image recognition and two cameras, the Rubik’s Cube Solver first calculates the current arrangement of the colorful squares. Using this image, an algorithm determines the rotation sequence for solving the cube. This sequence is then sent to the control and drives in real time. The colorful squares are automatically put in position within times, which for human beings, is completely impossible.

The Rubik’s cube solver was implemented with state-of-the-art automation technology from SIGMATEK. A flexible control system, high-performance servo motors and LASAL software for simple programming of the machine were used. In addition to the technical components, the students could also rely on the know-how of SIGMATEK experts for tips to complete their project successfully.

“For a successful career start, a practice-based education is of great value. Therefore, it is important for SIGMATEK to support the future engineers with implementing technical projects during their studies.”

Technical Details: For the hardware, the high-performance S-DIAS system from SIGMATEK is used: A compact CPU module, as well as digital I/Os and axis modules that control the powerful DSM5 servo motors to bring the squares of the cube into the correct position in the shortest time. The object-oriented, all-in-one LASAL engineering tool enables comfortable programming.