SIGMATEK in the Capital 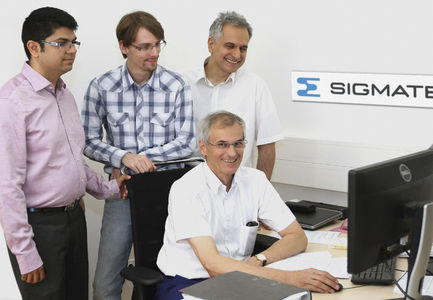 The Salzburg automation specialist opened an office in Austria's capital city at the beginning of the year. In addition to the continuous internationalization with facilities and subsidiaries around the world, SIGMATEK is now strengthened with a development and engineering office in its home country.

Office Manager Wolfgang Franta and his team of nine experts are responsible for the development of new trend-setting automation hardware in eastern Austria. Thereby, they continuously exchange information with the Innovation center in SIGMATEK's headquarters located in Lamprechtshausen near Salzburg.

Regarding the choice of new location, SIGMATEK's CEO Development & Sales, Andreas Melkus remarked: "Vienna has a commuter belt of around 3.5 million people, numerous educational centers and a quality of life that many people appreciate. This potential was for us, reason enough to open a development and engineering office in the heart of Vienna."

From the subway station nearby, the new SIGMATEK office is also easily reachable by public transportation and provides space for up to 30 employees so that in addition to the development team, Sales can also be strengthened in the eastern part of the country.
Language: English
Contact
Support hotline
Locations
Fairs
This website uses cookies to give you the best possible service. By using our services you agree that we use cookies.       > Learn more
OK