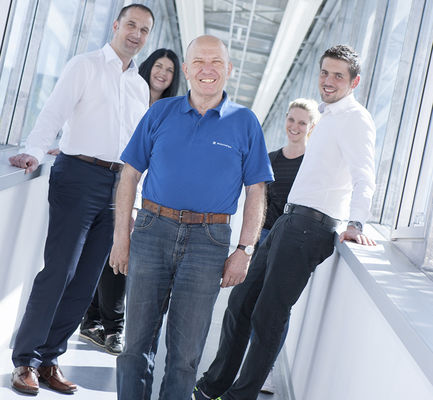 Ciao, goodbye, auf Wiedersehen ... at 70, SIGMATEKs Mr. Export Dr. Ehrenfried Machalka, is now stepping down from professional life. Over the last 5 years, the agile Grazer repeatedly extended his contract with the Salzburg automation technology manufacturer. For the full-blood engineer, retirement at 65 was too early: “We work on exciting, challenging projects around the world and I simply wanted to remain a part of the SIGMATEK team.”

The degreed technician in Machine and Industrial Engineering has been Export Manager at SIGMATEK since 2002 and has successfully driven the internationalization of the high-tech company based in Lamprechtshausen forward. In addition to six international locations, SIGMATEK maintains a global presence through sales partners worldwide. In recent months, the Export Manager had been underway with his successors at partners in Turkey, Italy and South Africa to officially hand over his duties.

When asked about his personal recipe for success, Ehrenfried Machalka responds: “To be successful on the international market, it is important to respect the culture of others and see them as equals. And: The product must be a good fit, like our complete automation systems for machine manufacturing combined with our team, which supports the customers worldwide with their implementation.”

Marianne Kusejko, Management Finances and Personnel: “When long-standing employees, who do their job with such great commitment as Dr. Machalka, want to remain in professional life longer, we support them. In our teams, we consciously utilize the synergy between experienced practitioners and ambitious young people.”

“I greatly enjoyed my time at SIGMATEK. I see the last five years as years gained and for that, I would like to thank the SIGMATEK Management Team”, says Ehrenfried Machalka. Now, the Styrian will be dedicating more time to his life’s work: the 13th century castle Ehrenfels in St. Radegund. A large part of which, Ehrenfried Machalka has restored over 35 years with his own hands.