In- and output card with timestamp function 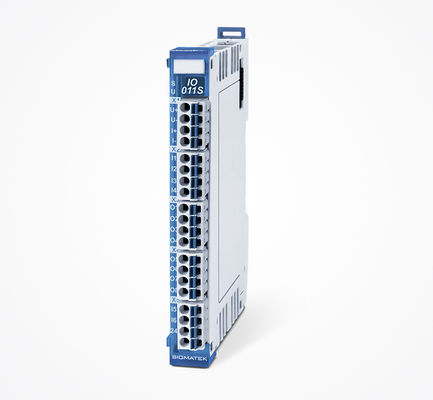 The IO 011S mixed module from the S-DIAS series is a true multi-talent with 14 digital in- and outputs as well as two analog inputs. Since the intelligent IO 011S preprocesses signals, switch statuses or processes can be recorded in microseconds, independent of the bus cycle time and CPU performance.

The six digital inputs (+24 V/3.5 mA/1 µs) have a latch mode with which a timestamp, based on the CPU cycle, is generated in µs. Positions and processes can therefore be precisely calculated to the microsecond. The latch function can be set to rising, falling or both edges.

The eight short-circuit proof and back-readable digital outputs (+24 V/0.5 A/150 µs) have a time-trigger mode. With the time-trigger function, the status of the digital outputs can be changed at a defined time between two cycles. Switching processes or reaction times of actuators can thereby be compensated to the microsecond.

In addition, the very compact module is equipped with an analog voltage (±10 V/16 bits) and analog current (0-20 mA/ 16 bits) input. The inputs also have a latch mode (rising, falling or both edges) with which a timestamp in µs, base on the CPU timestamp, is generated when the upper or lower limit of a configured voltage or current threshold is exceeded. The analog inputs are also equipped with a time-trigger function, with which the inputs can be read at a defined time offset in µs base on the CPU cycle.