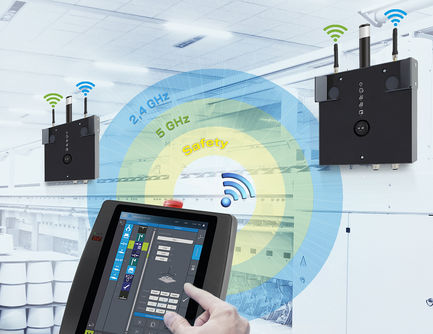 To enable system operators to move even more freely along the production line, SIGMATEK has developed the “Wireless Roaming Feature” for wireless HMIs.

The TÜV-certified, wireless operating solution with Safety-to-go from SIGMATEK consists of three main components: a wireless panel from the HGW 1033 series with Safety elements (SIL 3/PL e), the base station BWH 001 as the access point and charging station and an S-DIAS Safety control. To increase the quality of the wireless transmission in the immediate machine environment, a redundant transmission process is implemented. Safety and payload data are simultaneously transmitted over two WLAN frequencies 2.4 and 5 GHz. Analogous to wired solutions, Safety-relevant data is sent via the Black Channel principle.

When multiple base stations and HMIs are used for complex, very large-scale machines and systems, the “Wireless Roaming Feature” provides reliable and nearly unlimited coverage. The HGW panel is directly coupled with the selected machine and Safety control. The base station serves as the communications bridge between the wireless and cable-connected networks. Roaming means that an active connection exists over at least one of the two frequencies at all times. 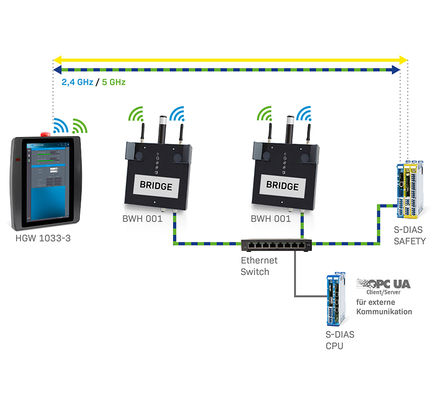 By combining the interfaces of the base stations used, all network participants (HGW, machine/Safety control) are connected to one another over a single subnetwork. To operate the network at a high performance with low latency, a VLAN (Virtual Local Area Network) can be used in an existing network infrastructure. This ensures that the performance of the wireless operating solution is not affected by the data flow from higher-level company networks.

For the user, the “Wireless Roaming Feature” provides more operating comfort, functionality and system availability. In the HGW visualization, all available machines are displayed. The operator wirelessly connects to the desired machine or system sector via the panel. While the user moves along the system, the panel scans for the best network based on the current RSSI signal strength. Switching networks can be triggered by a user action or automatically.

For integrating the wireless operating solution into the control system or for data exchange with existing third-party systems, the integrated OPC UA interface is used.